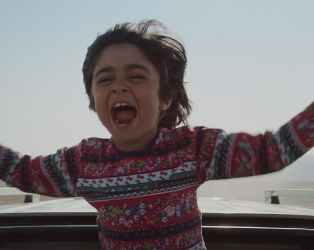 July at the IFI

June 27th 2022: This July, the Irish Film Institute (IFI) presents a selection of international new releases, including Nitram, Futura and McEnroe. Throughout the month, the IFI will host a new Ukrainian film festival, Untold Ukraine, as well as two retrospective seasons, one focusing on films that adapt the works of Patricia Highsmith and one dedicated to German filmmaker Wim Wenders, each screening in-cinema from Saturday 2nd.

Screening in IFI Cinemas from Friday 29th is Irish drama Joyride, from director Emer Reynolds and starring Olivia Colman; the opening night screening will be followed by a Q&A with the director. Also opening on Friday 29th is new Iranian feature Hit the Road, which follows a family on a road trip across a rugged landscape.

In special events, IFI Family celebrates a beloved classic with a screening of The Railway Children on Sunday 3rd, ahead of the release of its sequel this summer. Also screening on Sunday 3rd is The Afterlight, a piece of work existing as only one 35mm print, composed of fragments of hundreds of films starring a cast of actors who are no longer alive. This screening will be followed by a Q&A with director Charlie Shackleton, hosted by filmmaker Tadhg O’Sullivan.

This month, EAFFI Discoveries returns with a screening of C. B. Yi’s Moneyboys, which follows two romantically-involved male escorts as they grapple with both their personal lives and societal expectations, screening on Monday 4th and introduced by writer and actor Mark O’Halloran.

July’s From the Vaults feature, The Butcher Boy, screens on Tuesday 5th in association with the Abbey Theatre and will be accompanied by readings of new work from five poets responding to the film, presented by London poet and performer Inua Ellams. This month’s Archive at Lunchtime centres on Irish holiday camps on film, with free daily screenings of films from the IFI Irish Film Archive that connect to the theme. In July, the Irish Focus strand showcases Dancer from the Dance, a selection of short films curated by John Scott, which gather Irish and Irish-identifying choreographers from a range of practices, ethnicities and generations, presented in partnership with the Irish Modern Dance Theatre and screening on Monday 11th.

On Sunday 10th, the IFI will screen a double-bill of classic Doctor Who films, Doctor Who and the Daleks and Daleks – Invasion Earth 2150 A.D., in stunning 4K. This month, Wild Strawberries, our monthly film club for over 55s, will screen Hearts Beat Loud on Wednesday 27th and Friday 29th.

Documentaries at the IFI this month include Castro’s Spies, telling the story of Cuban spies sent undercover to ’90s America, screening from Friday 1st, and McEnroe, highlighting the life and career of sporting icon John McEnroe, screening from Friday 15th. From Friday 22nd, Kurt Vonnegut: Unstuck in Time, the first feature documentary based on the American author, and Notre-Dame on Fire, which forensically outlines the events of the well-known landmark’s 2019 fire, screen in IFI Cinemas. Fire of Love, which recounts the risky lives of volcanologist couple Katia and Maurice Krafft, screens at the IFI from Friday 29th.

Screening at the IFI and online on IFI@Home this month are Eric Ravilious: Drawn to War, focusing on the undervalued British artist and available from Friday 1st in-cinema and Friday 15th online; Futura, a new documentary offering a portrait of present-day Italy through the eyes of its young people, screening and streaming from Friday 8th; and Donna, which centres on inspiring trans activist and performer Donna Personna, screening in-cinema and on IFI@Home from Friday 15th.

Screening at the IFI from Saturday 2nd to Sunday 31st is Wim Wenders: King of the Road, a retrospective season dedicated to the filmography of the German filmmaker, including Alice in the Cities, Buena Vista Social Club, Pina and more. A season of adaptations, Patricia Highsmith On Screen, including films such as Strangers on a Train, The Talented Mr. Ripley and new documentary about the author Loving Highsmith, screens at the IFI from Saturday 2nd.

From Saturday 2nd to Wednesday 27th, a Dublin-based Ukrainian creative collaborative is running a Ukrainian Film Festival at the IFI, offering Irish audiences the opportunity to enjoy the best of contemporary Ukrainian cinema, as part of Untold Ukraine, a series of art events organised in Dublin throughout the summer. Proceeds from ticket sales go to Nova Ukraine, a non-profit organisation dedicated to providing humanitarian aid to the people of Ukraine.

Coming to IFI@Home nationwide this month from Friday 8th is Insider/Outsider: New Documentary Perspectives, a collection of feature-length documentaries which position Irish filmmakers within an international community of storytellers, and includes films such as Deargdhúil: Anatomy of Passion and In The Name of Peace: John Hume in America.

Our monthly strand The Bigger Picture presents a screening on Thursday 28th of Pat Garrett & Billy the Kid, with an introduction from journalist and broadcaster Pat Carty. The Mystery Matinee screening this month takes place on Sunday 24th, offering audiences the chance to see a secret film which could be anything from throughout the history of cinema.

Tickets for new releases and special events are on sale from the IFI Box Office on (01) 6793477 and from www.ifi.ie, as per the IFI’s Weekly Schedule. View the PDF version of our July programme here. Online rentals from IFI@Home are available at www.ifihome.ie. For further information and high-res images, please contact Casey Hynes (chynes@irishfilm.ie) at the IFI Press Office.

SUNDAY 31ST
Wim Wenders: The Salt of the Earth