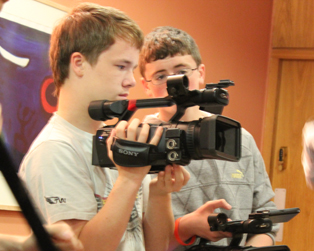 The FÍS initiative is a suite of innovative film and digital media literacy programmes and projects managed by the Institute of Art, Design & Technology (IADT) in close collaboration with the IADT’s National Film School.

The Short Course in Film is an IFI Initiative, developed in conjunction with FIS Film Project and Fresh Film Festival and piloted with a number of schools.

www.fisfilmproject.ie: A highly successful film project for primary schools that supports teachers to explore film as a medium of expression in relation to the arts, introduces them and their pupils to aspects of the film-making process and embeds the creative use of technology in Irish classrooms.

www.fisfilmpostprimary.ie: This platform hosts user generated content as outputs from two post primary projects: A core objective of FÍS is to collaborate with appropriate national and international partners in the education sector and creative industries in order to engage young people in the creation, practice and sharing of film and digital media content.

For this collaboration with the Irish Film Institute, on the filmmaking aspect of the Junior Cycle Short Course, post-primary FÍS filmmaking resources are available to teachers HERE

Founded in 1997 as part of the Limerick Film Festival as the Irish School’s Video Competition, Fresh Film Festival was originally a schools video competition for secondary students. It has since grown into a year round organisation with a focus on national and international filmmakers spanning the primary and secondary age groups. ‘Fresh’ has incrementally grown in scope in response to increasing numbers of entries and ‘Ireland’s Young Filmmaker Awards’ now constitute three sections – Junior (7-12 years), Senior (12- 18 years), and The International Young Filmmaker Awards. Each section is open to individual filmmakers, schools, youth and community groups in these age categories.

Films created for the Junior Cycle Short Course can be shared with other young filmmakers through the Fresh Film Festival. See Fresh website here: www.freshfilmfestival.net.