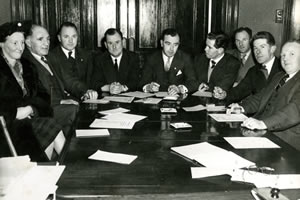 The National Film Institute (NFI, now the IFI) was founded in 1943 and officially incorporated on June 2, 1945. Established under the patronage of the influential and controversial Archbishop of Dublin, John Charles McQuaid, the NFI was dedicated to combating what Pope Pius XI described in his 1936 Papal Encyclical, Vigilanti Cura, as ‘the school of corruption’ in the motion picture industry and working for its transformation ‘into an effectual instrument for the education and the elevation of mankind’. While the other leading film organisation of the time, the Irish Film Society, was interested in interpreting and understanding the art of cinema, the NFI saw itself as the teacher and moral guardian of the cinema-going public.

Under Archbishop McQuaid’s direction, the NFI not only maintained a distributing library of films available to schools, colleges and associations around the country, but also became involved in the production of safety, health and educational films in the 1940s, ‘50s and ‘60s. Many of these were commissioned by government departments to offer information on matters of public health and safety, personal finance, and on historical and cultural subjects. The Institute also produced numerous educational ‘filmstrips’ for use in the classroom by teachers. Also notable is a series of films recording the highlights of All-Ireland Hurling and Football Finals between 1947 and 1979.

By the early 1980s, Church influence within the NFI had declined, and in 1982, the decision was made to delete references to the Vigilanti Cura from the articles of association in order to reflect the now secular nature of the Institute, and to rename the organisation as the Irish Film Institute (IFI). While it was clear that the Irish Film Institute was no longer concerned with the morals of its audience, education through (and about) film was still a significant part of its remit: an education department was developed with the aim of bringing a broader and deeper experience of cinema to audiences of all ages and abilities, from primary school children to senior citizens.

At this time of reinvention and reinvigoration, a campaign to create the Irish Film Centre (IFC) as a home for the Institute and other organisations dealing with film culture got underway, and an 18th Century Quaker Meeting House was acquired in the regenerated area of Temple Bar in Dublin. The Irish Film Centre (which is still home to the IFI) was opened in Eustace Street on 23 September 1992 by the then Taoiseach Albert Reynolds. In the two decades since its move to Eustace Street, the IFI has become one of the busiest and most dynamic arts organisations in the country, engaging with audiences nationally and internationally.

Aside from providing the IFI with a centrally located public space with (then) two cinemas, a film shop and café bar, the new venue allowed the Institute to develop other aspects of its activities in addition to its main exhibition programme, such as the education, festivals and retrospective programmes. The new location also provided the IFI Irish Film Archive with custom-built storage and research facilities, thereby ensuring that it was recognised as an essential part of the IFI, safeguarding its collections and increasing public access to its holdings.

The IFI has had many homes over the years and has seen a radical transformation in its ethos since its foundation; however, a commitment to and love of cinema have always been central to its mission. In 2009, the IFI underwent an extensive redevelopment, supported by the Department of Arts, Sport and Tourism ACCESS II Scheme, which expanded its facilities to include a third cinema and new archive research facilities, allowing it to have ever more ambitious aims for itself and its audiences, while remaining dedicated to achieving its core objectives: Preserve, Exhibit and Educate.