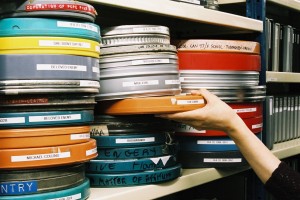 The Irish Film Archive has a non-purchase acquisition policy and acquires donations from private sources as well as from production companies and professional bodies. Material is donated to us primarily by those eager to see films preserved and centralised in a national archive. The Irish Film Board for instance is a valuable source of material as it deposits in the Archive a preservation copy of each film it has helped to finance. Over the last decade and a half, major collections have been acquired from many sources. Donors include a number of Government Departments, Gael Linn, the National Museum of Ireland, Bord Failte and film- makers such as John Boorman and Neil Jordan, amongst others.

The moving image collection exists on a number of different formats and covers a wide variety of genres. The categories displayed above are intended as a broad introduction to the major types of material we hold.