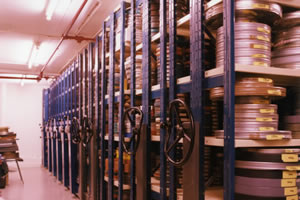 The IFI Irish Film Archive holds one of the largest collections of film and film-related materials in Ireland.  Over 700 individuals or organisations eager to see their films preserved and centralised in a national archive have entrusted material into our care.

We have a non-purchase acquisitions policy, and material is accepted from private sources, production companies and professional bodies. In addition to commercial output, we are eager to acquire amateur material, once it falls within our acquisition policy.

The collection numbers over 30,000 cans of film, 15,000 broadcast tapes, and an extensive collection of digital material. In addition to our moving image collections, we hold a large number of items in our Special Collections, i.e. artefacts posters, stills, and documents. These are held in custom-built, climate-controlled vaults, the only ones in the country that have been designed for the long-term storage of this type of archival material.