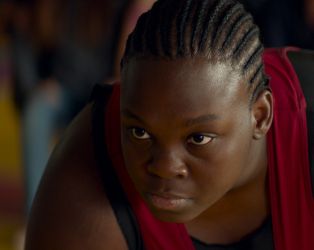 Aging film star George (Gérard Depardieu) is well past his prime; petulant and needy, his tendency to crash motorbikes and embark on drunken misadventures has accelerated his decline, both in the public’s eye, and in his private life. Aissa (Déborah Lukumuena), a semi-pro wrestler who earns a living as a security officer, has a hard time handling her complicated love life. When Lalou (Steve Tientcheu), George’s right-hand man and only friend, takes a leave of absence for several weeks, Aissa is immediately appointed as his replacement. Between this pragmatic young lady bodyguard, and the spoilt, entitled actor, a singular bond begins to take root. With an emphasis on sharp writing, nuanced characterisation, and an avoidance of sentimentality, Constance Meyer’s debut film is a low-key joy, which benefits immeasurably from the on-screen chemistry of the leads.