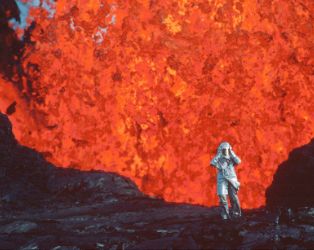 World renowned volcanologists Katia and Maurice Krafft were killed on June 3rd, 1991, while attempting to capture terrifyingly close video footage of the eruption of Mount Unzen in Japan. Sara Dosa’s affectionate and engaging documentary pays homage to the French couple who became media darlings in the ‘70s and ‘80s, celebrated for their dramatic on-site observations of catastrophic eruptions, spewing lava and pyroclastic flows. With gentle narration by filmmaker Miranda July, Dosa recounts how the couple – she a geochemist, he a geologist – met in ’66, and began touring the world’s active volcanoes. Their story is told through a wealth of extraordinary, hypnotic archival footage, much of it shot by the couple, illuminating the strange beauty and destructive power of the volcanoes, and the willingness of the Kraffts to put themselves at risk in the name of science.