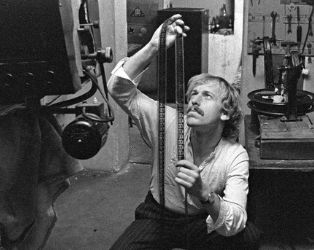 Kings Of The Road, one of the key films in the New German Cinema movement of the 1970s, constitutes the final part of a loose trilogy of road movies, along with Alice In The Cities and Wrong Move (1975). It follows the travels and travails of Robert (Hanns Zischler), whose marriage and family are mid-break-up, and the companion he meets following a suicide attempt, travelling film projector engineer Bruno (Rüdiger Vogler). Over its leisurely runtime and almost wholly improvised dialogue, the two encounter characters suffering through their own difficulties and despairs, including Pauline (Lisa Kreuzer), a cashier in one of the rundown cinemas Bruno services.