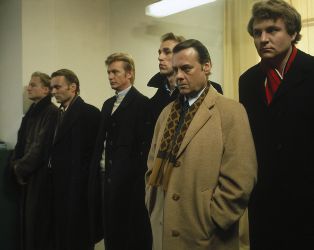 Philip (Helmut Griem) returns to his family after completing a five-year prison term for a crime of which he was wholly innocent, framed by his former employer. Struggling to reconnect with his wife Lisa (Brigitte Fossey) and child after his experiences inside, he is also suspicious of the seemingly close relationship Lisa has with David (Dieter Laser), his former lawyer. When this suspicion spills into bloodshed, Philip once again finds himself in the clutches of his former employer. The Glass Cell is Highsmith in a lower key, focusing on the anguish of a man suffering injustice and loss in a film she personally admired.