John McEnroe was one of the most explosive and compelling sporting icons of all time; an era-defining talent, and the number one tennis player in the world for four consecutive years, he was also a volatile man prone to self-destruction. Barney Douglas’s documentary features unseen archival film from some of the biggest matches in tennis history, including the US Open and Wimbledon, as well as home video footage from John himself. Contributions from John’s wife and children provide a level of intimacy that takes the film beyond a sports biopic and into the realm of something deeply personal and confessional. Beyond John’s tennis legacy – his combined 149 titles still rank as the highest in the Men’s Open era – his story grows to become a search for connection, a journey towards acceptance of himself and others. 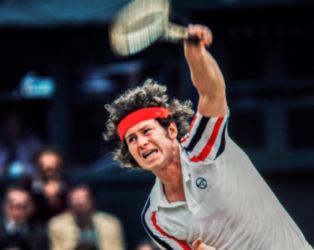