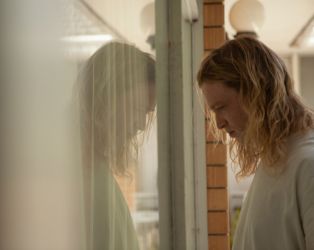 The 15.20 screening on July 5th will be followed by a pre-recorded Q&A with with director Justin Kurzel and actress Essie Davis.

The Port Arthur massacre, in Tasmania, April 1996, where 35 people were murdered and 23 others injured at the hands of Martin Bryant, remains the worst mass shooting in Australian history; Justin Kurzel’s dramatization casts a dispassionate eye over the events leading up to the tragedy, focusing on the troubled young man who perpetrated the horrific acts on that fateful day, without lapsing into exploitation or insensitivity. Twenty-something year-old Nitram (Caleb Landry Jones), as he is nicknamed, is socially awkward and suffering from depression; childlike, yet impulsive, and unpredictable, he struggles to hold down any sort of job and is a source of endless anxiety to his increasingly harried parents (Judy Davis and Anthony LaPaglia). When he meets Helen (Essie Davis), an eccentric heiress, she appears to offer him a chance at a normal relationship.