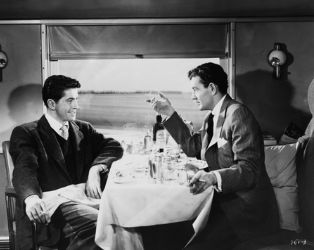 Following the publication of her first novel, Strangers On A Train, in 1950, the rights to make what would become the first of many cinema adaptations of Highsmith’s work were surreptitiously bought by Alfred Hitchcock, who kept his name from proceedings in order to secure a lower price. When Guy (Farley Grainger) meets Bruno (Robert Walker), he humours his suggestion that they ‘trade’ murders, each taking care of the person causing the other personal difficulties, with their lack of connection to their victims guaranteeing their safety. When Bruno unexpectedly follows through on the deed, he pressures the reluctant Guy to keep his end of the bargain.