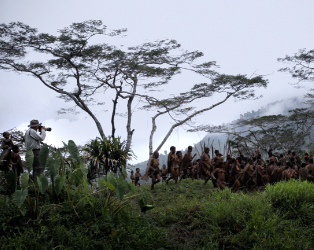 Photojournalist Sebastião Salgado is renowned for capturing the darker side of humanity in his images, from the exploitation of South American gold mine workers to the genocide in Rwanda. Despite the nature of his work, he proves an engaging storyteller as he recounts the circumstances of his life, from his training as an economist to his move to photography and now, partly as a reaction to his experiences, his work as an environmental conservationist in his native Brazil. Footage shot by Wenders’s co-director Juliano Ribeiro Salgado, the photographer’s son, adds an extra dimension to this moving tribute to an extraordinary man.