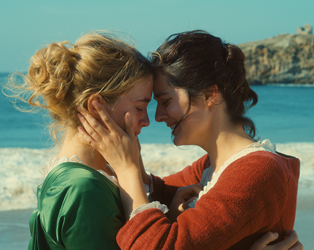 November 13th 2019: The 2019 IFI French Film Festival, the event’s 20th anniversary edition, opens at the Irish Film Institute (IFI) tonight. Ireland’s largest French cultural event, which features 24 Irish premieres, will run for twelve days until next Sunday, November 24th. The festival will open with a sold out gala screening of Céline Sciamma’s critically acclaimed Portrait of a Lady on Fire. Director Cédric Klapisch will visit the festival tomorrow evening to take part in a sold out Q&A following the Irish premiere of Someone, Somewhere. The full programme and tickets are available from www.ifi.ie/frenchfest.

Other guests scheduled to appear include actor Vincent Macaigne, who will take part in Q&As following screenings of Cédric Kahn’s Happy Birthday and Anne Fontaine’s Pure As Snow on Saturday 16th and Sunday 17th respectively. Journalist and writer Bayon, founder of The Music Section (1981), Arts Editor (2010-2014) at the French newspaper Libération, and co-scriptwriter of music documentary Oh, les filles! will visit the festival on Thursday 21st.

A particularly strong representation of female filmmakers this year includes new films from Lucie Borteleau (Lullaby), Justine Triet (Sibyl), and Manele Labidi Labbé (Arab Blues). The festival will also feature a special tribute to pioneering filmmaker Alice Guy-Blaché (1873-1968). Guy-Blaché’s shorts will screen throughout the festival, while Pamela B. Green’s Be Natural, a new documentary about Guy-Blaché narrated by Jodie Foster, will receive its Irish premiere on Sunday 24th.

This year’s retrospective focuses on the work of Claude Sautet, whose carefully crafted dramas were huge successes both at home and abroad. The four films chosen as part of the focus are: Danger Ahead (Classe Tous Risques), which sees a gangster on the run journeying home to his family; The Things of Life, a masterfully crafted melodrama which sees an architect reflect back on his life; Vincent, François, Paul and the Others, the biggest public success of Sautet’s career, filmed during the 1974 French presidential campaign, reflects an era of men’s turmoil and female emancipation; and A Heart in Winter, Sautet’s touching love triangle drama starring Emmanuelle Béart. The retrospective is supported by Institut Français Paris and the Embassy of France in Ireland.