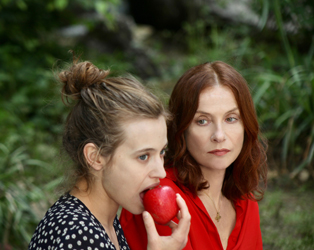 The screening on Sunday 17th will be followed by a Q&A with actor Vincent Macaigne.

Maud (Isabelle Huppert), stepmother to the beautiful young Claire (Lou de Laâge), is consumed by jealousy when she discovers that her own lover (Charles Berling) has fallen for her stepdaughter. Huppert’s brilliantly complex and ambiguous ‘Wicked Queen’ is equal parts attractive and diabolical, while a
terrific male cast is led by Benoît Poelvoorde, Vincent Macaigne and Damien Bonnard. All the classic elements are in place – the red apples, the woods, the animals, the house in the forest, the number 7 – while a thoroughly modern Snow White discovers sensual and romantic pleasures.