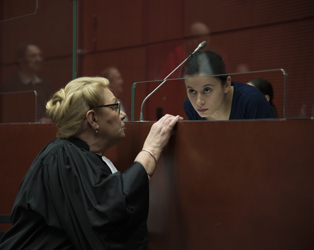 Lise Bataille (newcomer Melissa Guers) was 16 when her best friend Flora Dufour was murdered. Accused of the crime, first put on remand for six months and then placed under house arrest with an electronic bracelet, Lise is now 18, and her trial is about to start. A brilliant cast includes Anaïs Demoustier (the director’s sister) as the prosecutor and Lise’s parents, Roschdy Zem and Chiara Mastroianni. Told from the point of view of the courtroom observers, the palpable strain on the parent-child bond is the very core of the film, as the trial changes their relationship forever.