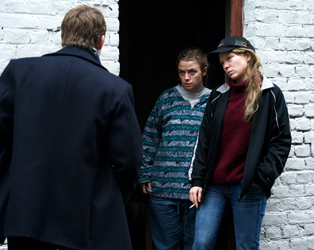 It’s Christmas in Roubaix, a crime-ridden town in France, where the local police force is kept occupied by a string of crimes from petty fights to rape. When an old woman is found murdered in her bed, it leads to an investigation into the two women (exquisite performances from Léa Seydoux & Sara Forestier) living down the street who initially raised the alarm. Desplechin’s (our guest of honour at the 2013 festival) drama is part social realism, part thriller, with a rich orchestral score by Grégoire Hetzel that heightens the tension adding a mystical and spiritual dimension. MPR

Director’s note: Desplechin’s fictional adaptation of a TV documentary about the central police station in his hometown Roubaix is captivating throughout.