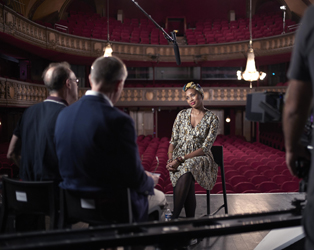 This Q&A with Bayon has unfortunately been cancelled.

“What if it wasn’t Elvis who invented rock’n’roll, but Edith Piaf when, in 1949 her lover, middleweight champion Marcel Cerdan, died, and she sang her hymn to love and death, Mon Dieu?” Alternating footage and interviews with iconic French female rock stars from the ‘60s to the present day (Françoise Hardy, Brigitte Fontaine, Vanessa Paradis, Charlotte Gainsbourg…), the film captures the female rock scene, shining new light on the history of the genre, in the process raising issues of femininity, feminism and gender. With voiceover by Clémence Poésy, Oh, les filles! reverses perspectives, focusing on women, and redefining rock. MPR

Director’s Note: Scripted by Libération journalists Armanet and Bayon, this vivid music documentary is grounded in the legacy of Edith Piaf.