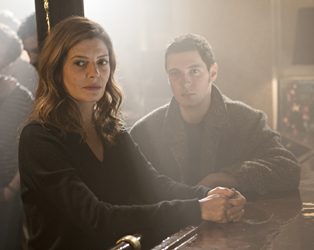 Chiara Mastroianni heads the cast as Maria in Christophe Honoré’s inventive comedy about a failing marriage after Maria’s infidelity with her young student is exposed. Following a confrontation with her husband, she moves out for the night to stay in a hotel directly across the road where she is ‘visited’ by a number of characters including the younger version of her husband, her husband’s first love, and her own dead mother, to berate her for a string of infidelities. In room 212, she reflects upon her marriage, gifted with the ability to see it all at once. Inspired by Leo McCarey’s The Awful Truth, this is a playful, witty fantasy, served by stunning cinematography.

Director’s Note: Winner of the Best Actress Award at this year’s Cannes Film Festival, Chiara Mastroianni takes us with her as we get caught up, thrilled by unforeseen situations and conversations.