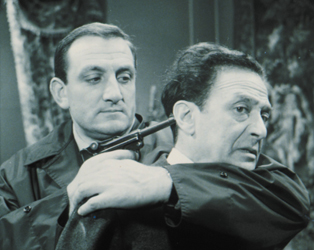 Sautet’s second feature, a fatalistic film noir, adapted from a novel by José Giovanni, sees Abel Davos (Lino Ventura), a gangster on the run, journeying home to France with his wife and children. In Nice he meets Eric Stark (a young Belmondo co-starring here immediately after Breathless), a new mob recruit sent to accompany Abel on the final stretch. “This early Sautet makes us feel compassionate toward the robber/gangster played matter-of-factly by Ventura, while abhorred at his cruelty in seeking vengeance. This portrait, filled with honesty and humility, is what makes this film so powerful and timeless.” — John Woo.