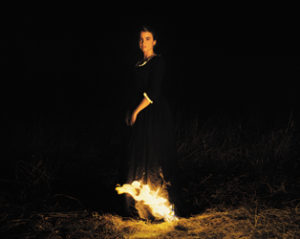 18th century France: Marianne (Noémie Merlant) travels to an island in Brittany having been commissioned by an Italian countess (Valeria Golino) to make a portrait of her daughter Héloïse (Adèle Haenel) for a prospective husband. However, Héloïse has not consented, not wishing to be married. Thus Marianne must pretend to be a walking companion by day, secretly executing her portrait by night. Gradually the two women connect and a subtle seduction of stolen glances, delicate touches and conversation gives way to burning desire. MPR

Opening night wine reception courtesy of the Embassy of France in Ireland.