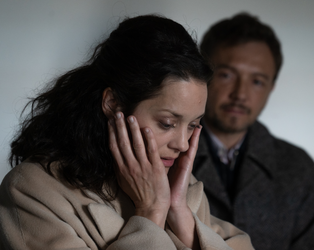 including a tribute to the late Jean-Luc Godard

Today, details of the programme for the 2022 IFI French Film Festival were announced at the Irish Film Institute in Dublin.

Across 35 screenings, this annual celebration of French film at the Irish Film Institute will present works by many renowned and established directors, as well as showcasing exciting new voices in cinema. The festival will feature 22 Irish premieres and, in most cases, this will be the only opportunity for Irish audiences to see these titles on the big screen. The programme comprises an intriguing mix of feature films and documentaries ranging from social and political dramas to comedies.

IFI Director Ross Keane said “We are delighted that the IFI French Film Festival is back once again with a fantastic selection of the finest French films straight from the international festival circuit. The scale of the programme reflects the remarkable quality of French films made in the last year and also the appetite our audience has for this national cinema. While the focus will remain on new features, we are also delighted to be presenting some important classics from some key figures of French cinema who have sadly left us during this past year”.

Festival Director and Programmer Marie-Pierre Richard commented: “Welcome to the 2022 festival! Godard is in so many ways at the heart of French cinema, and so it was with heavy heart we said farewell to JLG this year. We’ve taken this opportunity to celebrate his work with four examples from his glowing 1960s output, including Vivre sa vie (1962); Contempt (Le Mépris, 1963); Two or Three Things I Know About Her (Deux ou trois choses que je sais d’elle, 1967); and Weekend (Week-end, 1967).”

The Festival will open on 16th November with the Gala Night screening of Rise (En Corps) from writer-director Cédric Klapisch, a heart-warming and generous drama which focuses on a young dancer reassessing her life following a potentially career-ending injury. The Festival will close on November 27th with Winter Boy (Le Lycéen) directed by Christophe Honoré, a deeply moving study of grief and teenage self-discovery featuring a remarkable performance by newcomer Paul Kircher (who won Best Performance at the San Sebastian Festival in September) alongside Festival favourite Juliette Binoche.

New films in the programme this year focus on youth, coming of age and self-discovery including the hypnotic Rodeo by Lola Quivoron (which won the Coup de Coeur prize in Un Certain Regard at Cannes this year); the humorous and poetic The Mountain by Thomas Salvador (winner of the SACD Prize, Official Selection, Cannes Directors’ Fortnight); the beautifully composed and sensitive Petite Solange by Axelle Ropert; and the powerful and poignant debut feature by Emmanuelle Nicot, Love According to Dalva starring the outstanding young actress Zelda Samson (who won the Louis Roederer Foundation Rising Star Award at Cannes this year).

There is a large selection of documentaries including The Super 8 Years by Annie Ernaux (who recently won the Nobel Prize for Literature) which uses Super 8 footage shot by her late ex-husband Philippe Ernaux combined with her own reflective narration as she looks back on a pivotal part of her life, and also Sébastien Lifshitz’s exceptional document on queer identity and life in 1950s-60s Paris, Bambi: A French Woman.

We have our usual mix of works from established directors and Festival favourites including Stéphane Brizé (Another World), Arnaud Desplechin (Brother and Sister), Emmanuel Mouret (Diary of a Fleeting Affair), Philippe Faucon (Harkis), Jean-Pierre and Luc Dardenne (Tori and Lokita), and Albert Serra with the tropical and elliptical widescreen thriller Pacifiction which screened in official competition at Cannes this year.

While looking forward to welcoming audiences in person to the IFI on Eustace Street, some titles will also be available to stream on IFI@HOME.

To mark the passing last month of the legendary Jean Luc Godard, the Festival will present a four-film programme from Godard’s 1960s period alongside a new documentary, Godard Cinema – Godard seul le cinéma (Official Selection, Venice International Film Festival 2022) which tries to grasp the essence of Godard who came to embody the ‘auteur’ figure more than any other director.

There will be two additional unique screenings: Krzysztof Kieślowski’s widely popular arthouse classic Three Colours: Red (1994) will be presented in new 4K restoration as a tribute to the late, wonderful actor Jean-Louis Trintignant; while the breathtaking seven-hour-long restored version of The Wheel by Abel Gance (restored as closely as possible to the original released in 1923) will be presented across two days.

Writer-director Cédric Klapisch follows 26-year-old Elise (Marion Barbeau), a ballet dancer who suffers career-threatening injuries on-stage. During recovery, she gets a job at an artists’ residency in Brittany where she finds herself, by chance, catering for a contemporary dance company. Klapisch is familiar with the world of dance and Rise is a heart-warming and generous comedy drama.

Writer-director Lola Quivoron’s fast-paced debut follows teenage Julia (brilliant first-time actress Julie Ledru), an atypical heroine in search of herself and looking for her own tribe.

Urgent, propulsive and dynamic, Tori and Lokita from Jean-Pierre Dardenne & Luc Dardenne, simmers with a quiet rage at the plight of its titular pair, representative figures for all of Europe’s at-risk migrants.

Momentous and visionary The Wheel by Abel Gance is one of the first great epic works in the history of the cinema, restored in a reconstructed seven hour version as close as possible to the original released in 1923

*[ The Wheel (La Roue) – Abel Gance © 1923 – Films Abel Gance – Pathé Consortium Cinéma – Fondation Jérôme Seydoux-Pathé. A restoration made possible thanks to the Jérôme Seydoux-Pathé Foundation in partnership with the French Cinémathèque and the Swiss Cinémathèque with the support of the CNC. Reconstruction of the film: François Ede. Musical reconstruction: Bernd Thewes. An event supported by Arte and the ZDF. The soundtrack was recorded at the world premiere at the Konzerthaus in Berlin, during a film concert by the Berlin Philharmonic Orchestra conducted by Frank Strobel, on September 14, 2019]

A disorienting, shocking, at times perversely beautiful, and ultimately unforgettable tour into the very essence of our corporeality, from Lucien Castaing-Taylor & Véréna Paravel.

Writer-director Stéphane Brizé teams up again with Vincent Lindon to deliver a captivating drama of class struggle and personal dilemmas.

Cyril Leuthy’s film covers the ‘auteur’ period of the ’60s; Godard’s ‘political films politically’ of the ’70s, the Dziga Vertov group and creation of Sonimage; the ’80s ‘pivotal’ period with international recognition and reintegration of classical production systems; and Histoire(s) du cinéma (1988–1998): fragments from 495 films, 148 books, newsreels, photographs, paintings in eight episodes… one of the major works of the century.

Actor-screenwriter-director Thomas Salvador follows his debut feature Vincent returning to the mountains in another hypnotic, humorous and poetic tale of a remarkable hero.

Emmanuel Mouret’s delightful, subtle, and witty film follows on from Love Affair(s) in 2020.

October 2015: French customs seize seven tons of cannabis in the heart of the capital. Striking and fluid photography by Claire Mathon, and a gripping flow of dialogue, information and details unmask the truth to dizzying effect in this film from Thierry de Peretti.

Reminiscent of Bergman, and of Arnaud Desplechin’s own A Christmas Tale and Kings and Queen, his new vibrant emotional drama is a tale of hate, rivalry, and reconciliation.

In her poignant debut feature, Emmanuelle Nicot explores the ramifications of conditioning and abuse with great sensitivity and grace.

Seventeen-year-old Lucas (Paul Kircher) life is suddenly derailed when his father dies in a car accident, casting the boy into a state of shock and confusion – a deeply moving, yet hard-edged study of grief and teenage self-discovery from Christophe Honoré.

Mixing archive footage and fiction, Our Brothers prompts reflection and debate on immigration, integration and police violence from Rachid Bouchareb.

Mikhaël Hers follows Amanda with another contemplative, delicate film, this time set in 1980s Paris.

During the Algerian War (1954-1962), many young Algerian men, often from impoverished backgrounds, volunteered to fight with the French army while their nation was struggling for independence; Philippe Faucon’s sensitive portrait follows two of these so-called Harkis.

David Moreau’s affecting and thrilling story about a trafficked lion cub who escapes the airport and ends up in the home of 12-year-old Inés and her brother, Alex. They set out to repatriate the lion to Africa and embark on a daring road trip, determined to get the lion home.

With her son David Ernaux-Briot’s help, Annie Ernaux, winner of the 2022 Nobel Prize for literature, assembles Super 8 footage shot by late ex-husband Philippe Ernaux from 1972 to 1981; through voiceover, the footage becomes an extension of Ernaux’s writing – a new novel in images.

Cinema tickets cost €11.50 each, except for the opening film which includes a post-screening reception and costs €15.

IFI@Home screenings cost €7.50 each for a three-day rental. Please keep an eye on IFI@Home for titles available to view.

Special thanks to the French Embassy in Ireland for their continued support and involvement. The close cultural ties between Ireland and France have grown stronger since the signing of the Ireland-France Joint Action Plan 2021-2025 to further strengthen our cooperation. Film is an integral part of this cooperation and of our cultural relationship.