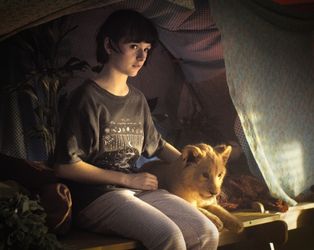 Join us for an IFI French Film Festival special family showing of King, an affecting and thrilling story about a trafficked lion cub who escapes the airport and ends up in the home of 12-year-old Inés and her brother, Alex. The pair set out to repatriate the lion to Africa, with the help of their eccentric grandfather. With customs officers on their tail, the trio embark on a daring road trip, determined to get the lion home. Firmly rooted in fiction rather than a wild animal adventure, the company behind King used a combination of virtual and real lion cub, the latter now living in the wild in Africa. Shades of E.T. and The Iron Giant resonate in the thrilling scenes which combine an element of magic with adventure.

English subtitles will be read aloud.