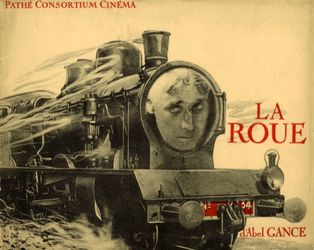 PLEASE NOTE THIS FILM IS SCREENING IN TWO PARTS. ONE TICKET WILL ALLOW ADMISSION TO BOTH SCREENINGS.

We are delighted to present this unique screening of the momentous and visionary The Wheel by Abel Gance, one of the first great epic works in the history of the cinema, restored in a reconstructed seven hour version as close as possible to the original released in 1923. This meticulous restoration made from the negative and numerous prints, based on the original script by Abel Gance, took four years. The soundtrack was recorded at the world premiere in the Konzerthaus in Berlin, during a ciné-concert performed by the Berlin Philharmonic, directed by Frank Strobel, September 14th, 2019.

Synopsis:
The guilty and destructive passion of a man for his protégée leads them both to tragedy. The Wheel explores the relationship between a railway man, Sisif (Séverin-Mars) and the orphan girl he adopted, Norma (Ivy Close), and his struggle to hide his love for her. Starring Severin-Mars, Ivy Close, Gabriel de Gravone and Pierre Magnier. Assistant Director: Blaise Cendrars.

Sixteen months shooting, one hundred and fifty hours of rushes, the original budget multiplied by ten, The Wheel took two years to edit. Composed of a prologue and four parts, a passionate family saga incorporating elements of Émile Zola, Victor Hugo and William Shakespeare, The Wheel is a major work whose intensity, modernity and evocative power influenced Eisenstein and Kurosawa.

A restoration made possible thanks to the Jérôme Seydoux-Pathé Foundation in partnership with the French Cinémathèque and the Swiss Cinémathèque with the support of the CNC.

An event supported by Arte and the ZDF. The soundtrack was recorded at the world premiere at the Konzerthaus in Berlin, during a film concert by the Berlin Philharmonic Orchestra conducted by Frank Strobel, on September 14, 2019.