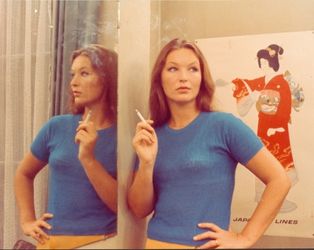 Derived from a newspaper report — the so-called ‘shooting stars’ about housewives in the new vast housing projects around Paris — the film follows the daily life of Juliette Janson (Marina Vlady), a married housewife and part-time prostitute, picking up clients to pay for the mod cons of modern day living. Godard’s most essayistic film, this is a lyrical, self-reflexive, philosophical examination of both filmmaking and consumer society in the mid-60s. Godard narrates in a whispered voiceover, and remarkably fed some of the dialogue and direction on set to his actors via an earpiece! Enjoy here again the widescreen colour cinematography of Raoul Coutard.

The screening will be introduced by Alice Butler, co-director of aemi (an Arts Council funded organisation that supports and screens moving image work by artists and experimental filmmakers).