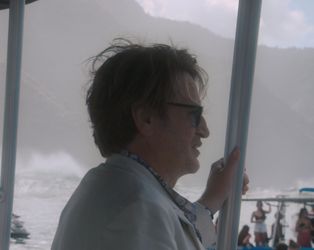 Set on the island of Tahiti, we follow the enigmatic De Roller (Benoît Magimel), High Commissioner of French Polynesia, clad in a white suit with sapphire blue sunglasses, as he ventures around the island paradise. Immersed in thought, he ruminates, imagines, speculates, fantasises, and flirts with the beautiful Shanna (Pahoa Mahagafanau). Meanwhile, rumours circulate of a possible resumption of nuclear testing, prompted by the sighting of a submarine and the presence of French engineers on the island. Inspired by Tarita Tériipaia’s memoires, writer-director Albert Serra (The Death of Louis XIV) mesmerises us with this elliptical, political, tropical widescreen thriller.