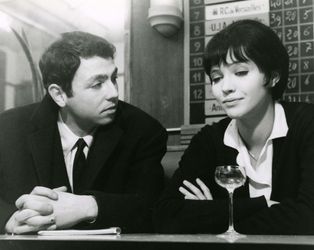 The impeccable black-and-white Vivre sa vie tells the tragic story of Nana (an extraordinary Anna Karina) an aspiring actress. Nana (a reference to both Zola’s novel and Renoir’s 1926 film and, also an anagram for ‘Anna’) works in a record store in Paris giving herself to occasional prostitution to cover the rent. Soon she is introduced to a pimp…

Broken into twelve ‘tableaux’ in the life of Nana, Godard, with Raoul Coutard’s radical aesthetic mixes, composed classical images, or what Godard called ‘living paintings’, with elaborate choreographed actions shot in long takes on location with direct sound recording the ambient sounds of the streets, hotels and cafés.

The screening will be introduced by Marie-Pierre Richard, director & programmer of IFI French Film Festival.