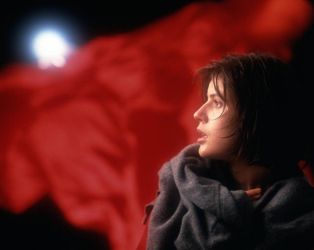 Tribute to Jean-Louis Trintignant Presented in new 4K restoration with the support of MK2 Films and Curzon.

The third part of Krzysztof Kieślowski’s Three Colours trilogy, following Blue (1993) and White (1994), which is inspired by the colour scheme of the French flag, and the themes of the Republic – liberty, equality, and brotherhood – is an extraordinary, triumphant masterpiece. Jean-Louis Trintignant, an elderly retired judge who fills his time eavesdropping on phone conversations, plays one of his most iconic roles, alongside Irène Jacob as Valentine, a young model. Their unlikely encounter after she runs over his dog with her car, turns into friendship. As their story overlaps, we learn of a young man who aspires to be a judge.

The screening will be introduced by Dr Tony Tracy, Huston School of Film and Digital Media, University of Galway.
Notes by Marie-Pierre Richard.