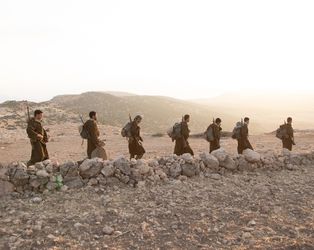 During the Algerian War (1954-1962), many young Algerian men, often from impoverished backgrounds, volunteered to fight with the French army while their nation was struggling for independence; Philippe Faucon’s sensitive portrait follows two of these so-called Harkis, Salah (Mohamed Mouffok), and Kaddour (Amine Zorgane), who find themselves under the command of Lieutenant Pascal (Théo Cholbi). As the conflict draws to an end, and the prospect of Algerian independence becomes inevitable, the outlook for the Harkis seems bleak. Facing a predicament, Lieutenant Pascal bravely confronts his superiors, insisting that every man in his platoon be evacuated to France.

The screening will be introduced by Dr. Clíona Hensey, researcher and lecturer in French and Francophone Studies currently based at the University of Limerick. Her first book, Reconstructive Memory Work: Trauma, Witnessing and the Imagination in Writing by Female Descendants of Harkis, will be published by Liverpool University Press in 2023.