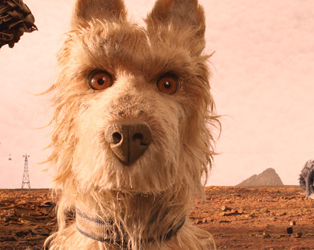 March at the IFI

March is here and we’ve got a busy month ahead.

That includes exclusive titles like the Oscar-nominated A Fantastic Woman from March 2nd and Hirokazu Kore-eda’s The Third Murder (March 23rd).

We’re also kicking off our new Evening Course (from March 6th), welcoming a season dedicated to Ida Lupino (from March 3rd) and a whole lot more.

Read on for details of everything coming during March 2018 at the IFI!

NEW RELEASES
From Mar 2nd: A Fantastic Woman, The Ice King
From Mar 9th: Sweet Country, Wonder Wheel, You Were Never Really Here
From Mar 16th: The Square, Unless
From Mar 23rd: Dark River, I Got Life!, The Third Murder
From Mar 30th: Isle of Dogs, Journeyman

3RD SAT – 14.00 | IDA LUPINO: OUTRAGE
With the weakening of the Hays Code in the late 1940s, Hollywood was once again able to tackle more taboo topics. Outrage was, along with Johnny Belinda (Jean Negulesco, 1948), one of the first films to tackle the subject of rape and its aftermath.

6TH TUES – 18.30 | IFI EVENING COURSE: PERSONA
Bergman’s intense  psychological drama about two women (Liv Ullman and Bibi Andersson) who are stranded on an island together. With commentary by Dr Barry Monahan of UCC.

7TH WED – 18.30 | IDA LUPINO: THE BIGAMIST
The film is notable for its bravery in exploring what was for the time a controversial subject, especially given its relatively sympathetic attitude to Harry, portraying him as a man motivated by loneliness and weakness rather than a callous philanderer. As part of a season of films dedicated to filmmaker Ida Lupino.

8TH THURS – 18.30 | INTERNATIONAL WOMEN’S DAY: BOMBSHELL THE HEDY LAMARR STORY
To celebrate International Women’s Day on 8th March, join us for a live event of Bombshell: The Hedy Lamarr Story followed by Q&A with Susan Sarandon and director Alexandra Dean. Rediscover the story of the Austrian-American beauty who had a secret life as an inventor.

10TH SAT – 13.15 | IDA LUPINO: NEVER FEAR
Lupino’s first official film as director, following uncredited work on 1949’s Not Wanted when original director Elmer Clifton suffered a heart attack, also saw her receive credits for writing and producing, an extremely rare feat for a woman in Hollywood at the time (and indeed, since).

11TH SUN – 15.30 | OPEN CAPTIONED SCREENING: WONDER WHEEL
In 1950s Coney Island, waitress Ginny (Kate Winslet) dreams of former glories and an escape from her current existence in a dead-end job, she finds release in the form of an affair with a younger man (Justin Timberlake). With subtitles for the hearing impaired.

13TH TUES – 18.30 | IFI EVENING COURSE: TOGETHER
Swedish director Lukas Moodysson followed up his teen love story Show Me Love with this depiction of the communal homes of 1970’s Sweden, a sharp, funny look at the socialist ideals behind the shared living projects. Molly O’Cathain is a Swedish-Irish set and costume designer who will discuss the film.

13TH TUES – 18.30 | IFI FILM CLUB: YOU WERE NEVER REALLY HERE
Lynne Ramsay’s bracing, violent new film, her long-delayed follow up to We Need to Talk About Kevin (2011), stars Joaquin Phoenix in a coiled performance as Joe, a traumatised ex-army private contractor hired to rescue the daughter of a high-ranking New York senator from a vile sex ring. Join us for a chat about the film.

14TH WED – 18.30 | MY GENERATION + SATELLITE Q&A
This event will include a live satellite Q&A with narrator/star Michael Caine and director David Batty from BFI Southbank, hosted by Edith Bowman.

15TH THURS – 18.20 | OPEN CAPTIONED SCREENING: WONDER WHEEL
In 1950s Coney Island, waitress Ginny (Kate Winslet) dreams of former glories and an escape from her current existence in a dead-end job, she finds release in the form of an affair with a younger man (Justin Timberlake). With subtitles for the hearing impaired.

15th THURS – 18.00 | AN EVENING WITH BRUCE CAMPBELL
Hail to the King, Baby as Bruce Campbell lands in Dublin for one night only, and he’s coming to the IFI for a Q&A, live signing and lots of anecdotes. THIS EVENT IS NOW SOLD OUT!

18TH SUN – 13.00 | MYSTERY MATINEE
Another surprise film from the IFI. No clues, apart from the fact that it will be a feature film released over the last 100 years. Tickets €5, take a chance!

18TH SUN – 14.00 | IDA LUPINO: HARD, FAST AND BEAUTIFUL
Teenage tennis prodigy Florence (Sally Forrest) is forced to strive ever harder for success in order to satisfy the ambitions of her middle-class mother Millie (Claire Trevor), who sees her daughter as her ticket to greater social standing, and the attendant wealth and fame.

20TH TUES – 18.30 | IFI EVENING COURSE: FESTEN
A signatory to the Dogme 95 Manifesto, Thomas Vinterberg uses its conventions for this Shakespearean family saga. Story consultant and lecturer Rachel O’Flanagan will discuss the legacy of Dogme 95 through this film and others.

21ST WED – 20.00 | BLACK 47 + Q&A
This special preview is presented in partnership with Wildcard Distribution and Ireland’s Great Hunger Museum. It will include a Q&A with director Lance Daly and will be preceded by the short film The Hunger Times.

22ND THURS – 18.30 | THE BIGGER PICTURE: MORVERN CALLAR
The screening will be introduced by Willie White, Artistic Director of the Dublin Theatre Festival.

24TH SAT – 14.00 | IDA LUPINO: THE HITCH-HIKER
Marking yet another occasion when Lupino’s career broke new ground, The Hitch-Hiker is widely regarded as the first film noir directed by a woman.

25TH SUN – 11.00 | IFI FAMILY: THE LEGEND OF LONGWOOD
12-year-old horse-loving Mickey Miller is none too happy moving to small-town Ireland from New York. Wandering near her new home she finds a wild stallion, Silver, and local boy Sean tells her the myth of the legendary Black Knight, who can be seen roaming the land on horseback. Tickets: €4.80 per person/€14.40 family.

25TH SUN – 13.20 | IDA LUPINO: THE TROUBLE WITH ANGELS
Thirteen years after the closure of The Filmmakers, Lupino was finally afforded the chance to direct again, for what would turn out to be her final film in the position.

26TH MON – 18.45 | FEAST YOUR EYES: I GOT LIFE!
In March, our Feast Your Eyes selection is I Got Life, where you can enjoy the film and a specially devised main course following the 18.20 screening on Tuesday 13th – tickets €20.

27TH TUES – 18.30 | IFI EVENING COURSE: THE MAN WITHOUT A PAST
In this film, the amnesiac hero tries to rebuild his life from scratch. Dr Seán Crosson (Huston School of Film and Digital Media, NUI Galway) will talk about Kaurismäki’s films, their distinctive aesthetic, and his status as one of the Nordic region’s most accomplished filmmakers.

28TH WED – 11.00 | WILD STRAWBERRIES: LAST FLAG FLYING
Hal Ashby’s 1973 film adaptation of Darryl Ponicsan’s novel The Last Detail concerns two Navy men who take a young offender on the town before he goes to prison. In this loose sequel, three military vets reconvene in order to escort the body of one of their sons, killed in Iraq. Over 55s, tickets €4.25.

28TH WED – 18.30 | IFI & AEMI PROJECTIONS: SOFT FICTION & AND UNDER THAT
We are delighted to welcome Director of LUX, Benjamin Cook and artist Anne-Marie Copestake to introduce the screening. A post-screening discussion will take place in Studio 6 at Temple Bar Gallery + Studios. This will mark the re-launch of Dublin’s Critical Forum.

29TH THURS – 21.00 | IRISH FOCUS: KÍLA POTA ÓIR
Kíla Pota Óir is a portrait of one of Ireland’s most respected cult bands who merge folk and world music traditions into a euphoric live experience. This screening will be followed by a Q&A and music with Kíla and director Anthony White.

29TH THURS – 18.30 | IFI FRENCH FILM CLUB: I GOT LIFE!
One of the hits of last November’s IFI French Film Festival (where it screened under the name Aurora with lead actress Agnès Jaoui in attendance), Blandine Lenoir’s film strikes a balance between comedy and poignancy in its depiction of a situation rarely examined on film, that of a woman going through menopause.

30TH FRI – 11.00 | WILD STRAWBERRIES: LAST FLAG FLYING
Hal Ashby’s 1973 film adaptation of Darryl Ponicsan’s novel The Last Detail concerns two Navy men who take a young offender on the town before he goes to prison. In this loose sequel, three military vets reconvene in order to escort the body of one of their sons, killed in Iraq. Over 55s, tickets €4.25.