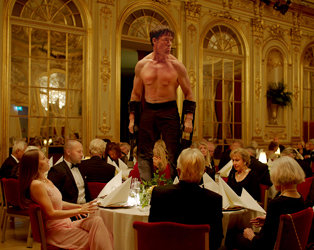 This film was released 16th March 2018, and is no longer screening.

An exuberant takedown of the contemporary art world, Ruben Östlund’s follow up to the much-admired Force Majeure (2014) is a similarly provocative work. When Swedish gallery director Christian (Claes Bang) has his phone stolen, he attempts to find the culprit via a phone-tracking app, a seemingly smart move that backfires with unforeseen and often hilarious consequences.

His life unravelling, Christian must oversee the opening of a new exhibition – the titular ‘Square’ – whilst accommodating celebrity artist Julian (Dominic West) and becoming entangled with journalist Anne (Elisabeth Moss). A popular winner of the Palme d’Or at last year’s Cannes Film Festival, The Square is an intoxicating mélange of pungent satire and surreal comedy, boasting an extended bravura sequence which must be seen to be believed wherein the after-dinner entertainment for a launch party gets alarmingly out of control.