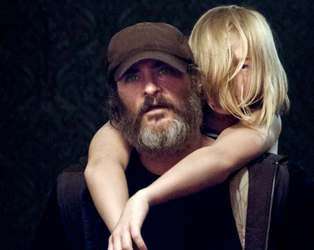 Lynne Ramsay’s bracing, violent new film, her long-delayed follow up to We Need to Talk About Kevin (2011), stars Joaquin Phoenix in a coiled performance as Joe, a traumatised ex-army private contractor hired to rescue the daughter of a high-ranking New York senator from a vile sex ring.

Shades of Scorsese’s Taxi Driver and Nicolas Winding-Refn’s Drive are evident in this stark, fragmented and brilliantly realised psychological thriller that boasts another of Jonny Greenwood’s angular scores. Ramsay’s approach to adapting Jonathan Ames’s 2013 source novel is distinctly unconventional; she focuses on building an impressionistic character study of the damaged figure of Joe, through layered flashbacks that gesture towards an abusive childhood. The narrative similarly is revealed in non-chronological fragments that coalesce into an intense, febrile and exciting work that bristles with menace and danger.

There will be an Open Captioned screening on Wednesday, April 4th at 20.00.