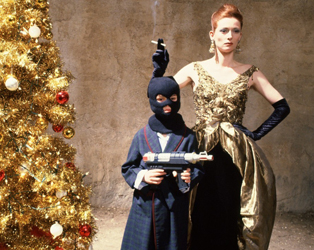 THE FILMS OF DEREK JARMAN, GRETA GERWIG’S LITTLE WOMEN, AND CHRISTMAS CLASSICS AT THE IFI THIS DECEMBER

November 28th 2019: This December, the Irish Film Institute (IFI) showcases a plethora of political documentaries, Greta Gerwig’s new adaptation of Little Women, a Derek Jarman retrospective, while the best of 2019 also returns to our screens. These accompany new releases from Lauren Greenfield and Kantemir Balagov, a seasonal selection, and much-loved classics including The Umbrellas of Cherbourg.

Headlining this December’s slate of new releases is Greta Gerwig’s adaptation of Little Women. Starring Saoirse Ronan, Emma Watson, Florence Pugh, Eliza Scanlen, Timothée Chalamet, Laura Dern, and Meryl Streep, it interrogates the traditional aspects of the story, bringing to life the much beloved characters. Also depicting the value of family, Ordinary Love, starring Lesley Manville and Liam Neeson, tells the story of a retired Belfast couple and their experience of cancer, which exposes simmering tensions in their relationship. A special preview screening on Tuesday 3rd will be followed by a Q&A with producer Brian J. Falconer, and directors Lisa Barros D’Sa and Glenn Leyburn.

Irish talent continues to shine in the form of documentary film this month. Irish-produced Shooting the Mafia provides a portrait of Sicilian photojournalist Letizia Battaglia, offering insight into her colourful personal life, her vivid memories, and her stark Mafia photographs for which she became famous. Also combining personal glimpses and artistic impressions, Seamus Heaney and the Music of What Happens is an intimate portrayal of the personal and literary legacy that Seamus Heaney left behind following his unexpected death in 2013. Showcasing the landscapes of Heaney’s childhood, and audio archive featuring his remarkable poetry, the film will screen on Monday 2nd, followed by a Q&A with director Adam Low, and Catherine and Marie Heaney, hosted by Prof Margaret Kelleher.

Spectacular audio will also feature in a special screening on Tuesday 17th of Niall McCann’s The Science of Ghosts, which sees Irish singer/songwriter Adrian Crowley ponder his life, past and future, questioning the nature of documentary film itself. This screening will be followed by a Q&A with McCann and Crowley, hosted by Matthew Nolan, and will feature a short musical performance.

Returning to the IFI this December, following a number of sold out screenings in October, are Bait and Miles Davis: Birth of the Cool. Mark Jenkin’s Bait tells the story of a family in a traditional fishing community facing unwelcome change. Shot using 16mm monochrome Kodak stock, its formally daring visuals have received critical acclaim. Returning after two sold out screenings, Miles Davis: Birth of the Cool uses rare archival footage to show how one man broke with convention time after time, revealing true talent and musical innovation.

Other upcoming documentaries include Lauren Greenfield’s The Kingmaker, a portrait of Filipino politician Imelda Marcos; Syrian filmmaker Feras Fayyad’s The Cave, which looks at life inside of a hospital in suburban Damascus; and Alex Gibney’s latest, Citizen K, an exploration of the relationship between the oligarchy and Russian government, told from the perspective of Mikhail Khodorkovsky.

While Citizen K focuses on the recent history of Russian politics, new drama Beanpole is set in 1945, and explores the immediate aftermath of the Leningrad siege. This second feature by Kantemir Balagov looks at scenes of trauma – mental and physical, human and architectural. Other dramas coming to the IFI this December bring family, memory, and time to the forefront of their narratives: So Long, My Son explores the lives of two young couples in China, and their family dynamics, with an experimental mixed chronology; and Long Day’s Journey into Night is a nocturnal dream-like film in two parts – the first in 2D and the second, shot in one take, in 3D.

Delving further into aspects of health and love are Arthur J. Bressan’s Buddies (1985), often cited as the first film on the AIDS pandemic, and the films of Derek Jarman, screening this December as part of a retrospective of the influential artist, alongside IMMA’s PROTEST! exhibition. The Jarman retrospective will run from Tuesday 3rd to Sunday 15th, featuring the filmmaker’s most significant works, such as Caravaggio (1986), Edward II (1991), and Wittgenstein (1993).

Seasonal screenings this year span a variety of genres, from horror to canonical classic. From IFI’s Horrorthon, Deathcember screens Monday 16th. Structured as a cinematic advent calendar, it is comprised of 24 films by 24 international directors, linked by quirky animated segments. This month’s Archive at Lunchtime screenings take on a seasonal theme, featuring Christmas-centred newsreels, amateur theatricals and shorts. An unusual take on a much-loved festive story, the IFI Family screening, The Man Who Invented Christmas, visualises Charles Dickens’s journey around London as he plots the narrative for A Christmas Carol. It’s a Wonderful Life, a favourite of the festive season, returns in a 4k digital restoration, to show Bedford Falls in its utopic small-town glory and its alternative reality.

Darby O’Gill and the Little People returns on Sunday 29th in celebration of its 60th anniversary. Screening on 35mm, this showing will be introduced by Conor Doyle, godson of Jimmy O’Dea. Other special events in December include European Cinema Night on Thursday 5th, where Paweł Pawlikowski’s Cold War returns for a free screening. This Oscar-nominated romance follows the separation of Zula and Wiktor, and their attempts to return to each other over the course of three decades. Our Wild Strawberries pick for the month, Sometimes Always Never, also offers a tale of exile and return, as one father searches stubbornly for his favourite son. The tension of both family and romantic heartbreak is undeniable in Jacques Demy’s 1964 The Umbrellas of Cherbourg, the first musical in which the dialogue was entirely sung. Michel Legrand’s hauntingly beautiful soundtrack is now even more poignant, as 2019 saw the passing of the 86-year-old composer.