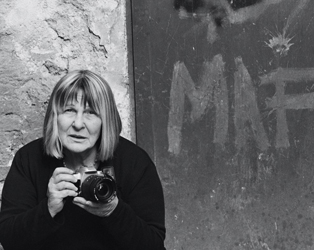 This film was released on Friday 29th November 2019 and is no longer screening.

The screening on Friday, November 29th at 18.30 was introduced by producer Niamh Fagan (Lunar Pictures).

Sicilian Letizia Battaglia began a lifelong battle with the Mafia when she first pointed her camera at a brutally slain victim. A woman whose passions led
her to eschew traditional family life and become a photojournalist, she found herself on the frontlines of one of the bloodiest chapters in Italy’s recent history. She fearlessly and artfully captured Sicilian life – from weddings and funerals to the grisly murders of ordinary citizens – to record the experience of the community she loved.

Much-admired documentarian Kim Longinotto adds a vivid portrait to her gallery of empowered and inspiring women. Juxtaposing glimpses of Battaglia’s colourful personal life with her unflinching photographs, archival footage, classic Italian films, and the now 84-year-old’s own memories, she presents a remarkable woman whose bravery helped expose the stark reality of life and death, under the oppressive yoke of the Corleonesi Mafia.