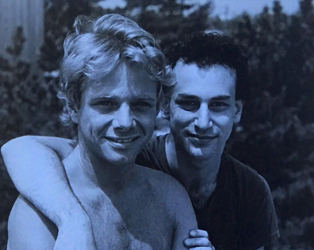 First clinically reported in 1981, the early years of the AIDS pandemic were characterised by a fear and stigmatisation of sufferers akin to hysteria. It wasn’t until the 1990s that mainstream American cinema moved to sympathetic portrayals such as Longtime Companion (Norman René, 1990) and Philadelphia (Jonathan Demme, 1993).

While Hollywood procrastinated, laudable early work to humanise those living with the illness included TV movie An Early Frost (1985), starring Aidan Quinn, Parting Glances (Bill Sherwood, 1986), and Buddies, acknowledged as the first film on the subject, from director Arthur J. Bressan Jr., who himself died of AIDS-related complications in 1987. Here, timid David (David Schachter) volunteers to be a ‘buddy’ to former outspoken activist Robert (Geoff Edholm), abandoned by friends and family as he lies dying.

Political, personal, and deeply moving, this is a remarkable document of darker times.