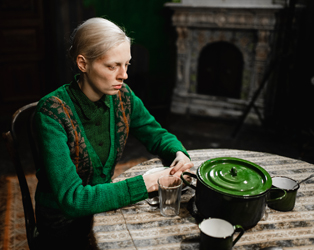 1945, in the immediate aftermath of the siege of Leningrad. Two women form a mutually destructive bond in an attempt to create a future life from the ruins of war. Iya (Viktoria Miroshnichenko), whose imposing height has led to her titular nickname, is a nurse in an overcrowded veterans’ hospital. Suffering from Post-traumatic stress disorder, she experiences occasional bouts of full-body paralysis that render her catatonic. Iya has acted as a caregiver to Pashka, the infant son of her friend Masha (Vasilisa Perelygina), a soldier who returns from the frontline to discover further tragedy awaits her at home. Kantemir Balagov has, with his second feature at the age of just 28, delivered a near masterpiece.

Uncompromisingly bleak, yet poised, elegant, and, at times, strikingly beautiful, Beanpole is a work of impeccable cinematic craft, with vivid central performances.