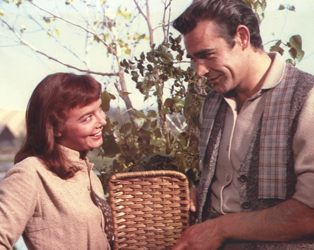 This 60th anniversary screening was introduced by Conor Doyle, godson of Jimmy O’Dea.

Generations of Irish people hold fond or fearful childhood memories of this Disney fantasy which mixes whimsy with magic, folklore and gothic. When Darby
O’Gill (Albert Sharpe), a wily caretaker falls down a well, he is held captive by Brian, King of the Leprechauns (Jimmy O’Dea) who grants him three
wishes.

Although some picketed the film’s launch for what they felt was its ridiculous stereotyping of Irish people, this boisterous romp remains eminently watchable, even 60 years after its release. The film has some wonderful scenes of merriment and horseplay between O’Dea and Sharpe, a sparkling performance by a strapping young Sean Connery, and breathtaking special effects.