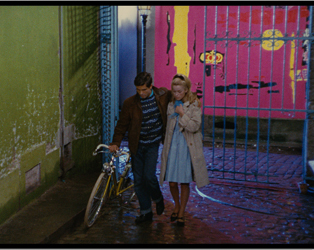 Jacques Demy’s Palme d’Or-winning The Umbrellas of Cherbourg, the middle film in a loose trilogy of romances, along with Lola (1961) and Les Demoiselles de Rochefort (1967), was the first musical in which the dialogue was entirely sung. In her breakthrough role, Catherine Deneuve plays Geneviève, a young woman deeply in love with Guy (Nino Castelnuovo), despite the disapproval of her mother (Anne Vernon). After Guy is drafted to fight in the Algerian War, Geneviève discovers that she is pregnant. When she receives few replies to her letters, she allows herself to be courted by wealthy Roland (Marc Michel), leaving Guy devastated on his return.

Told in a riot of rich, beautiful pastels, and set to Michel Legrand’s magnificently memorable score, the film is a rare treat, from what critic Geoff Andrew calls its ‘bauble-bright start to bittersweet end’.