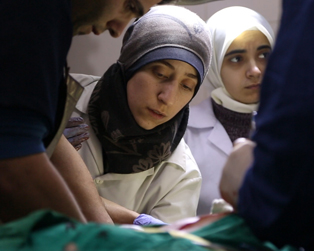 This film was released on 6th December 2019 and is no longer screening.

Syrian filmmaker Feras Fayyad has followed up Last Men in Aleppo, his Oscar-nominated 2017 documentary about the volunteer organisation The White Helmets who save lives on the streets of the besieged city, with another urgent and necessarily shocking depiction of life during the ongoing conflict. This time he has turned his focus towards Eastern Ghouta, a suburb of Damascus that has been under siege for five years, and the subterranean hospital known as ‘The Cave’.

Managed by thirty-year-old Dr Amani, her resourceful team try to cope with the endless line of wounded civilians. Operating the makeshift facility with great resilience and humour, Dr Amani must contend not only with the everpresent threat of bombing, but also with the chauvinistic attitudes of men who feel that a woman should be at home, not running a hospital.