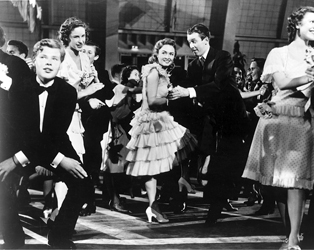 This film was released on 13th December 2019 and is no longer screening.

It’s A Wonderful Life has become required viewing during the Christmas period, and we’re pleased to present this perennial IFI favourite in a 4K digital restoration. James Stewart is George Bailey, loyal family man and friend whose selfless nature has resulted in him spending his whole life in hometown Bedford Falls, despite his ardent desire for travel and adventure. When local despot Mr. Potter seizes an opportunity to ruin George, and thus consolidate his own control over the town, George finds himself considering drastic action. However, Angel (Second Class) Clarence Odbody (played by Henry Travers) intervenes and shows George what life in Bedford Falls would have been like had he never been born.