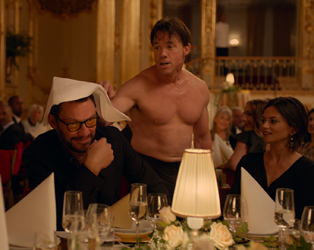 A busy March at the IFI sees the first of a new Hidden Figures strand, a fascinating Nordic Evening Course, two intriguing live-by-satellite events, and a new documentary following one of Ireland’s most exciting and innovative music groups.

March sees the launch of a new occasional Hidden Figures strand, which will explore in detail a filmmaker whose work is often overlooked. Ida Lupino (1918-1995) began her career as an actress, starring in films such as High Sierra alongside Humphrey Bogart. In the 1940s, Lupino co-founded The Filmmakers, an independent production company that allowed her to write, produce and direct films that focused on social issues, primarily those affecting women.

The Lupino season runs from March 7th to 25th with screenings of The Bigamist, Never Fear, The Hitch-Hiker, The Trouble with Angels and Hard, Fast and Beautiful, most of which will screen on 35mm. Each of the films in the season was directed by Lupino.

The IFI’s spring Evening Course this year runs on six consecutive Tuesdays from the 6th, and will focus on Nordic cinema. Screenings will include Ingmar Bergman’s Persona, Thomas Vinterberg’s Festen, and Aki Kaurismäki’s The Man Without a Past, with each film followed by a related talk from a specially invited guest. Places on the course cost €80 (€75 conc.), booking here.

Two exciting live-by-satellite events take place during the month. On Thursday 8th, Alexandra Dean’s new documentary Bombshell, which looks at the life of actress and technological pioneer Hedy Lamarr, will screen; the showing will be followed a satellite Q&A with Dean and executive producer Susan Sarandon, live from BFI Southbank. On Wednesday 14th, a satellite Q&A with Oscar winner Michael Caine will follow a screening of David Batty’s My Generation. This engaging and playful documentary, narrated by Caine, chronicles the cultural revolution of the Swinging Sixties and the societal upheaval we still experience today as a result.

The IFI’s March Irish Focus event will be Anthony White’s documentary Kíla: Pota Óir, a portrait of one of Ireland’s most respected and innovative bands. White followed Kíla on tour, and the film combines generous swathes of concert footage, candid interviews, and intimate backstage moments to create a lively record of one of Ireland’s most acclaimed live acts. The screening on Thursday 29th will be followed by a Q&A and music with the director and the band.

March’s Archive at Lunchtime, the IFI’s monthly free screenings of material drawn from the IFI Irish Film Archive, coincides with the Coming Home: Art and the Great Hunger exhibition at Dublin Castle from Thursday 8th. A number of films including Frank Stapleton’s Poorhouse, Sean McGuire’s Ocras, and two films from Steve Woods, Coranna and Ireland 1848, will screen throughout the month on Mondays, Wednesdays, and Saturdays as part of ‘Famine on Film’.

The national celebrations won’t go unmarked either; a selection of colourful Irish language shorts, Gearrscannáin Nua, will screen on Wednesday 7th to coincide with Seachtain na Gaeilge, while the IFI teams up with the St Patrick’s Festival on Bank Holiday Monday for a diverse selection of holiday-themed films.

To tie-in with the release of Lynne Ramsay’s You Were Never Really Here on Friday 9th, Willie White of the Dublin Theatre Festival will introduce a screening of Ramsay’s 2002 film Morvern Callar on Thursday 22nd. In the film, Samantha Morton plays the eponymous supermarket assistant who, on discovering him dead on Christmas morning, sends her boyfriend’s unpublished novel to a publisher before leaving for Spain with her best friend.

The IFI will again partner with aemi Projections to present another fascinating programme of artists’ and experimental filmmaking. Working in conjunction with Benjamin Cook of LUX, aemi will present Chick Strand’s 1979 masterpiece Soft Fiction and Anne-Marie Copestake’s And Under That on Wednesday 28th. The screening will be introduced by Benjamin Cook and Anne-Marie Copestake, and will be followed by a free discussion at the Temple Bar Gallery+Studios.

With its usual busy calendar of regular strands, plus releases of Ruben Östlund’s Palme d’Or winner The Square, Sebastián Lelio’s A Fantastic Woman, Alan Gilsenan’s Unless, and Wes Anderson’s stop-motion animation Isle of Dogs, there’s plenty to enjoy at the IFI this March.