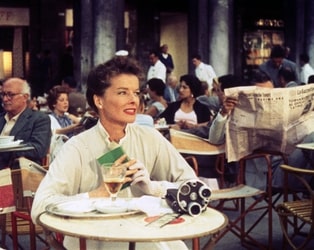 KATHARINE HEPBURN: WOMAN OF THE YEAR

Throughout April, the IFI celebrates the work of the iconic and inimitable Katharine Hepburn. Born in 1907, Hepburn became an unlikely Hollywood star in the 1930s with her beauty, wit, and the eccentric strength with which she imbued her characters. She got her big break into screen acting when an RKO Radio Pictures talent scout spotted her in a Broadway performance and offered her an audition for a role starring opposite John Barrymore in the 1932 film A Bill of Divorcement. Hepburn got the part and never looked back. Over time, though, in spite of Katharine Hepburn’s huge acting talent and range, Hollywood began to question her unconventional attitude and strong personality, branding her as ‘box office poison’ in the late 1930s. She refused to play the role of the Hollywood starlet off-screen, shunning the limelight and adopting an occasional attitude towards wearing makeup and giving press interviews. Over the course of her long and prolific career spanning six decades, she made dozens of films, including nine with her off-screen partner Spencer Tracy, and garnered a stunning twelve Academy Award nominations, winning four, which remains a record. Her credits include many of the most celebrated pictures of all time: The Philadelphia Story (1940), The African Queen (1951), Long Day’s Journey Into Night (1962), Guess Who’s Coming to Dinner (1967), The Lion in Winter (1968) and On Golden Pond (1981).