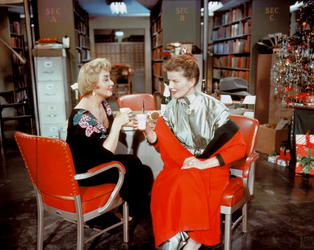 Desk Set, which was, rather wonderfully, written by Nora Ephron’s parents, was the first of Hepburn’s collaborations with Spencer Tracy to be filmed in colour. Here, she is Bunny Watson, the supremely efficient manager of a reference library undergoing computerisation. The new machines have been created by the ornery Richard Sumner (Tracy). As Bunny struggles with her boyfriend Mike’s (Gig Young) inability to commit and fears of jobs at the library being under threat, her initial hostility to Sumner fades. While prescient in its depiction of workplace fears about emergent automative technology, Desk Set’s heart lies in the romantic relationship between its two leads.