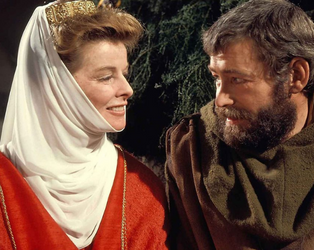 This screening will be introduced by Seamus Byrne, 3rd assistant director.

It’s Christmas 1183, and King Henry II (Peter O’ Toole) is hoping to announce his successor to the throne. Of his three sons, Henry favours Prince John (Nigel Terry) to take over. Queen Eleanor of Aquitaine (Katharine Hepburn), Henry’s imprisoned wife, has other ideas, and believes their son Prince Richard ‘The Lionheart’ (Anthony Hopkins) is the rightful heir. As the family gathers to celebrate the holiday, the indecisive king is subjected to the scheming of ambitious courtiers, who try to influence his decisions to their own ends. Meanwhile the cunning King Philip II of France (Timothy Dalton) seizes the opportunity presented by this internal jockeying in his bid to destroy their kingdom.