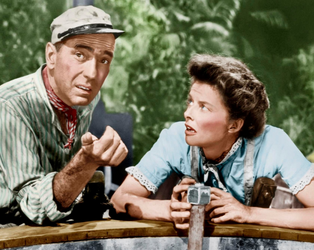 With The African Queen, Katharine Hepburn once again demonstrated her uncanny ability to generate crackling chemistry with her co-stars. A delightful odd-couple action romance, the film, set in German East Africa at the beginning of the First World War, charts the adventures of Rose (Hepburn), a prim, haughty missionary, and Charlie (Humphrey Bogart), the dissolute, gin-swilling captain of the titular steamer, as they set a covert course upriver to destroy a German gunboat. John Huston’s indestructible classic, Hepburn’s first film in colour, would go on to secure a long-overdue Academy Award for Bogart, his only Oscar, though Hepburn herself lost out to Vivien Leigh for A Streetcar Named Desire.