HEPBURN: STATE OF THE UNION

Frank Capra’s satire on political machinations begins with tycoon Grant Matthews (Spencer Tracy) being encouraged to run for President of the United States by his partner, newspaper heiress Kay Thorndyke (Angela Lansbury), who intends to be the true power in the oval Office. Initially, the fly in the ointment is Matthews’s estranged wife Mary (Hepburn, who replaced Claudette Colbert days before filming began), who nevertheless agrees to publicly support him, but she is dismayed to see his idealism compromised and corrupted under Thorndyke’s influence. With a cynicism that still resonates, this unfairly overlooked film is never less than entertaining, with a vast array of talent involved. 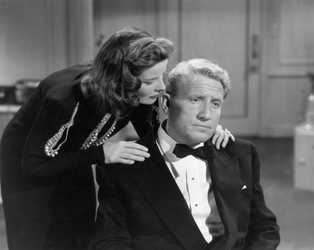