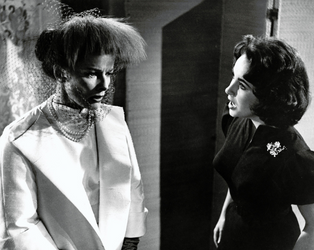 New Orleans, 1937. Catherine Holly (Elizabeth Taylor) is institutionalised after witnessing the death of her cousin who died in mysterious circumstances while they were on holiday in Europe the previous summer. Trying to suppress the truth of what happened, Catherine’s calculating aunt, Violet Venable (Katharine Hepburn), inveigles Dr Cukrowicz (Montgomery Clift) into a controversial course of therapy for her niece. The lurid thrills of Suddenly, Last Summer, adapted for the screen by Gore Vidal from Tennessee Williams’s play, are best enjoyed as high-camp Southern Gothic melodrama; the depiction of homosexuality, though coy by contemporary standards, is certainly more frank than in previous Williams adaptations, such as Cat on a Hot Tin Roof.