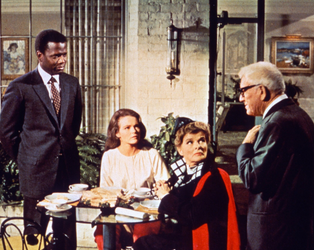 The seemingly liberal principles of wealthy couple Matt Drayton (Spencer Tracy), and his wife Christina (Katharine Hepburn), are tested when their daughter Joanna (Katharine Houghton, Hepburn’s niece) returns from her Hawaiian vacation with her new fiancé, Dr John Prentice (Sidney Poitier), an African American widower, much to the surprise of her parents. One of the few films of its era to depict an interracial marriage in a positive light, Guess Who’s Coming to Dinner has had a lasting impact on popular culture; the film was the ninth and final on-screen pairing of Katharine Hepburn and Spencer Tracy, who was very ill during the production, and died just 17 days after filming of his role was completed.