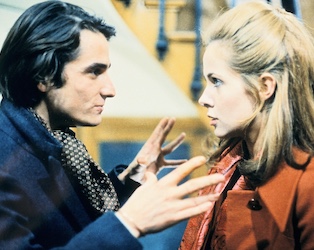 April 7th 2022: The IFI is proud to present a hybrid retrospective of the French New Wave director François Truffaut this May. From The 400 Blows (1959) to The Last Metro (1980), François Truffaut: For the Love of Cinema presents 13 of the auteur’s features, plus one short, from May 7th at the IFI in Temple Bar, and a selection online on IFI@Home. Cinema tickets and online rentals are now on sale.

The François Truffaut: For the Love of Cinema retrospective presents all five films in the adventures of Antoine Doinel series, both in-cinema and online on IFI@Home. The films follow the director’s alter ego, played by Jean-Pierre Léaud, from existential coming of age to love affairs, artistic failures and moments of philosophical poignance. The 400 Blows first introduces the character, through a film that in many ways marked the beginning of the Nouvelle Vague, from an opening scene using the city of Paris as a central character, through adolescent angst, to a tracking shot and freeze-frame that would change cinema history.

Presented in a double-bill in-cinema and online, the short film Love at Twenty sees Antoine working for Philips records, indulging in his passion for music and his new love for Colette, followed by Stolen Kisses, where Doinel has been discharged from the army and is reunited with love interest Christine Darbon (Claude Jade).

The fourth film in the Doinel cycle, Bed and Board, depicts the marriage between Antoine and Christine, which comes under threat as Antoine becomes obsessed with Kyoko (Hiroko Berhauer). In Love on the Run, the protagonist falls in love with Sabine who works at the local record shop, but as his relationship with Sabine progresses, his former loves Christine and Colette play a crucial role in his life once again.

The timeless New Wave classic Jules et Jim screens in-cinema and online during the For the Love of Cinema season. Jeanne Moreau plays Catherine, who is caught up in a complex, decades-long ménage à trois with the titular friends. This seminal work from Truffaut depicts turbulent missed chances from the carefree days before World War One to conflict between fate and regret years later, accompanied by a beautiful Georges Delerue score.

Truffaut’s infectious sense of fun is evident in early work Shoot the Pianist, a pastiche of American gangster films, originally based on Down Thereby David Goodis, and shot on visually stunning Dyaliscope. A more sombre tone of internal conflict and confusion of affections shines through in Silken Skin, an account of an extramarital affair that displays the influence of Renoir and Hitchcock on Truffaut. Both available to watch in-cinema and online.

Screening in-cinema only is Fahrenheit 451, a cerebral adaption of Ray Bradbury’s revered dystopian sci-fi novel, and The Bride Wore Black, a film about a woman seeking revenge following the sudden death of her husband on her wedding day, featuring a haunting Hitchcockian score by Bernard Herrmann, and a defiant performance by Moreau.

Also showing theatrically are later works including Mississippi Mermaid, in which Louis Mahé (Jean-Paul Belmondo), a tobacco plantation owner living on the island of Réunion, is awaiting the arrival of his bride-to-be, Julie Roussel (Catherine Deneuve), who he has never met. The charming and self-reflexive Day for Night depicts the trials and tribulations of making a film in Nice’s Victorian Studios, where the creation of a melodrama is plagued by the whims of a neurotic actor, starring Jacqueline Bisset, Jean-Pierre Léaud, and Truffaut himself.

Truffaut stars again in the rarely-screened La Chambre verte, a film based on the Henry James story The Altar of the Dead, where the auteur plays the lead, Julien Davenne, widower and veteran of the first World War, who is haunted by the dead, and misses the attentions of Cécilia (Nathalie Baye). Described by Eric Rohmer as ‘deeply moving’, and one of Truffaut’s most praised films, it was also one of his least successful financially.

The mature later work of Truffaut is presented through the 1980 historical drama The Last Metro, starring Catherine Deneuve and Gérard Depardieu, where theatre is a sanctuary in Nazi-occupied Paris. This less stylistic film is a reflection on cultural resilience, and the defiance of art in the face of oppression. Showing in-cinema and online as part of the IFI@Home encore season screenings.