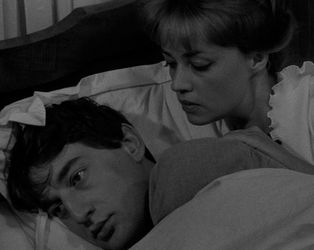 This screening will be introduced by Marie-Pierre Richard.

Truffaut’s hugely popular New Wave classic sees the legendary Jeanne Moreau at her most ebullient as Catherine, a Parisian beauty caught up in a complex, decades-long ménage à trois with the titular friends, introverted Austrian author Jules (Oskar Werner), and exuberant Frenchman Jim (Henri Serre), in the carefree days before World War One. Both men fall for the beautiful Catherine, but it is Jules who wins her hand. After the war, Jim visits Jules, Catherine, and their daughter, and discovers not only that his feelings for Catherine are unchanged, but they are reciprocated.